Kindness is the language which the deaf can hear and the blind can see.- Mark Twain. Mark Twain, was an American author and humorist. He wrote The Adventures of Tom Sawyer (1876) and its sequel, Adventures of Huckleberry Finn (1885), the latter often called “the Great American Novel”.  Twain was born shortly after a visit by Halley’s Comet, and he predicted that he would “go out with it”, too. He died the day following the comet’s subsequent return. He was lauded as the “greatest American humorist of his age”, and William Faulkner called Twain “the father of American literature”. 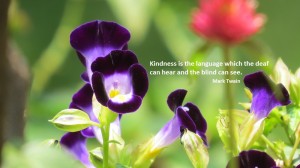